With assistance from our Ag Information Analyst, we have reviewed nitrogen use via data mining on the subject.  Nitrogen use per acre is up, but only slightly on average.  In 2012, a high sugar content year at 19.14% for the RRV if you recall, available nitrogen was 138 lbs./acre, in 2016 that number increased to just 141 lbs. per acre (a 2.2% increase in nitrogen available, which is soil tested nitrogen at 0 – 4’ plus applied nitrogen).  Generally speaking, we recommend 130 lbs. of actual nitrogen per acre, when using a 4 foot soil test.  We recommend 100 lbs. of actual nitrogen available if using a 2 foot soil test.

Sugarbeet varietal information:
What a difference a growing season has in influencing the same varieties

There have been questions from last year going into this year in regards to sugarbeet varieties currently available. The concern is that high yielding varieties are taking away from quality and high yields are the wrong way to go in terms of sugar production. The chart below (Figure 2) is a comparison of sugarbeet varieties in the American Crystal Sugar Company Official Variety Trials (ACSC OVT’s) comparing 13 varieties planted in both years (2012 & 2016).

The same 13 varieties grown in each year of these trials in 2016, yielded 8.0 tons per acre more with 2.4% sugar less sugar...these are exceptionally different and significant changes in quality and yield, due to environmental variation. In 2016, environmental conditions were the leading cause of increased nitrogen mineralization, and therefore the largest driver in the decrease of quality and increased root yield. Today’s American Crystal Sugar Company sugarbeet variety options are providing growers with the most talented varieties (in terms of disease resistance, root aphid resistance, sugar content and yield potential) American Crystal Sugar Company has had available (Figure 3), and the sugar produced per acre is testament to this with the 2016 crop setting a Company record of 9,698 lbs. of recoverable sucrose produced per acre. 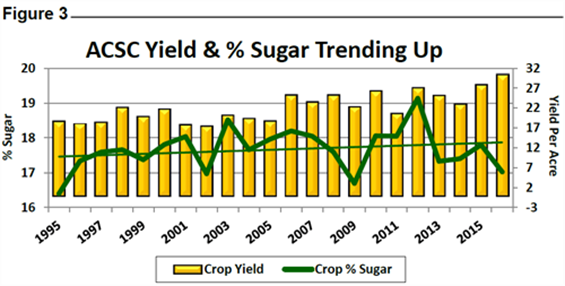