Glyphosate resistant weeds have the potential to develop into the number one production problem in MN & ND.

The fact is it has already happened in parts of the Southern Minnesota Beet Sugar Cooperative growing area and more isolated areas of the southern RRV. Table 1 shows NDSU/UM grower survey responses for weeds suspected of being resistant in 2011.

Table 1. Weeds In Sugarbeet Suspected of Being Resistant to Glyphosate in 2011. (Dr. Jeff Stachler)

*Minimum of three responses for each county

The Goal For 2012 - No Resistant Glyphosate Weed Seed Production

Don't forget About Other Crops

How to Identify Likely Resistant Weeds? 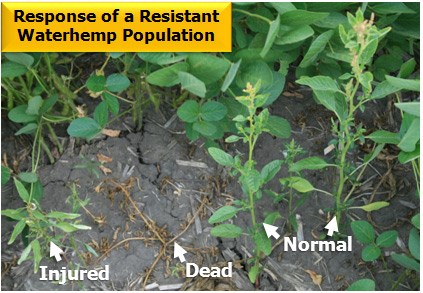 The early warm up to this year's growing season in the Red River Valley is likely to also result in a slightly earlier-than-average peak in sugarbeet root maggot fly (SBRM) activity. According to the NDSU root maggot model, peak fly activity typically occurs at about 650 degree-day units. As of Monday, May 21, root maggot degree-day (DD) accumulations for St. Thomas, Grand Forks, and Fargo were 400, 451, and 495 DD, respectively. It is too early to make an accurate prediction of when peak fly will occur at this time. However, based on the extended weather forecast, which includes cooler temperatures during the latter part of the week, here are some long-range, preliminary estimates for when peak fly might occur in southern, central, and northern portions of the Valley:

Growers in areas where high to severe SBRM infestations are expected should consider applying an additive postemergence insecticide, especially if their at-plant insecticide was a seed treatment material or a moderate rate of a granular product. Postemergence granules are usually effective if applied between 2 weeks and 5 days before peak fly, but will also likely be beneficial if applied within a 1-2 days (before or after) peak. Light to moderate rainfall after granular applications typically improves performance. Postemergence liquid insecticide applications should be targeted for peak fly, but will provide good results if applied within 2-3 days before or after peak.