CERCOSPORA LEAFSPOT INCIDENCE AND SEVERITY INCREASED DRAMATICALLY IN 2010 COMPARED TO RECENT YEARS. THIS WAS particularly apparent in the southern Red River Valley. Early planting, above average temperatures and well above normal relative humidity levels caused many favorable infection periods for disease. Cercospora was found in early July in the Moorhead and Hillsboro districts and by mid to late July in Crookston, East Grand Forks and Drayton districts. Numerous fields reached economic loss levels by mid-August in the Moorhead district. Inoculum levels will be much higher in 2011 than they have been for many years.

Three and two spray programs almost always increase revenue over just one or zero spray programs, see graph 1. One, two and three sprays increased revenue by $145, $298, and $373/acre compared to not spraying. 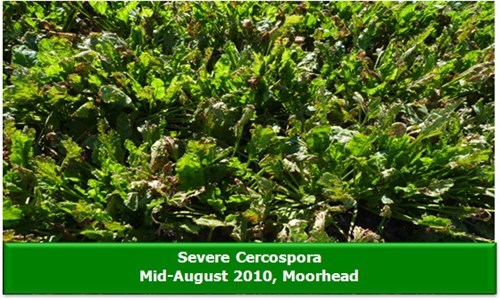 Factors Increasing Risk of High Incidence and Severity of Cercospora