Aphanomyces root rot has been a very serious disease causing beet yield and quality losses for decades. Most serious yield losses occurred in the 1990's. Wet and warm to hot growing conditions are most favorable for Aphanomyces development. Losses of plant population can be severe with seedling disease early in the season. Yield loss can be severe in late summer with entire fields abandoned if roots are determined to be unfit for storage. Yield losses have been significantly reduced with improved varieties. 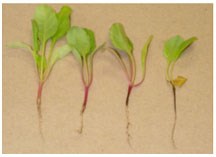 Aphanomyces causes seedling damping off if soil conditions are wet and warm soon after planting. Damping off is most commonly post-emergence. Varietal resistance is not active against the seedling stage of Aphanomyces.

Chronic root rot can occur anytime from late June until harvest. Chronic Aphanomyces can follow seedling disease but usually results from new infections of healthy roots. During early stages of infection leaf wilting may be one of the first symptoms. As Aphanomyces progresses smaller, less vigorous canopy development occurs and leaves begin to turn yellow. Severely infected plants may die.

Symptoms on roots are water soaked lesions often grayish brown to brown in color. If soil drying occurs after root infection tan to rust colored lesions on the surface of the root are common. This is often referred to as "russeting". Tap root tip rot is common where infection starts several inches below the soil surface on the root tip and then progresses upward on the root. Severe infestation may cause serious root deformity.

Losses can be serious stand loss, and most severe chronic infestations may result in total field abandonment if a majority of roots in the field are unfit for storage. 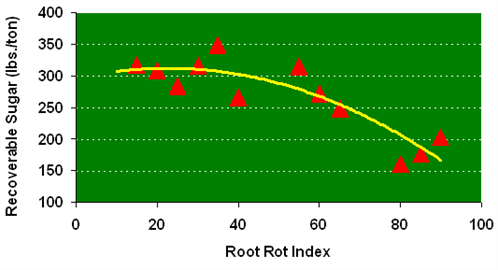 Apply 7-10 tons per acre of lime for excellent control of Aphanomyces root rot. Contact your agriculturist for more information.

Cercospora leafspot incidence and severity is higher than it has been for several years. Weather has been much more suitable for disease in 2010. Proper fungicide use will preserve the value of your crop.