Fusarium was first identified about 20 years ago in the Red River Valley. At that time the disease was a novelty and caused no economic loss to sugarbeet producers. The disease increased in incidence throughout the 1990's. Disease severity increased to the point of causing economic losses early this century. Yield loss has become so severe that fields have had to be abandoned in each of the last four years. Storage losses of sugar are very severe with Fusarium infected roots in piles. Fusarium can affect the crop from right after emergence up until harvest.

Fusarium will exhibit symptoms on seedlings as early as the 2-4 leaf stage of growth. Seedlings may initially show a yellow - green leaf mottling effect. As disease gets more severe leaves become chlorotic, with leaf margin or whole leaf necrosis. In severe situations up to 50% stand loss may occur

First observed symptoms in July, August and September maybe canopy wilting due to inability of the plant to efficiently transport water from roots to leaves. A cross section of the root will have distinct discoloration of the vascular rings. The discoloration may be dark grey to a rusty orange color. As disease severity progresses through the summer the leaf canopy will exhibit severe chlorosis or necrosis. Typical leaf symptoms exhibit discoloration, chlorosis or necrosis on only one half of the leaf. Roots may exhibit a tip rot that can be confused with Aphanomyces.

Yield loss can range from 5-50 percent. Fields with severe seedling disease may have to be replanted. Fields with more than 50% of the roots infected are considered unfit for long term storage. They must be harvested during prepile or completely abandoned. 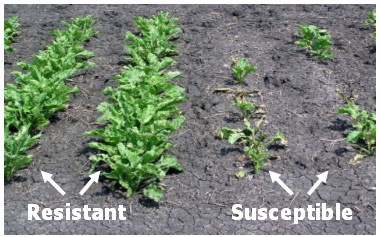 Clay County has the most severe yield loss from Fusarium. Norman County has the second greatest incidence and severity of Fusarium. The disease has also been documented in Wilkin, Grand Forks, Polk, Walsh and Pembina counties. It's likely all counties have at least a low incidence of the disease.