Aphanomyces, a soil borne disease, has caused yield loss and quality reductions in many fields for several years. Scientific evidence has proven that the addition of factory spent lime reduces the impact of Aphanomyces. Research conducted by Dr. Carol Windels has shown that there is a potential to increase Recoverable Sugar per Acre up to 100% by the addition of 10 tons of lime (dry matter basis) on fields infected with the disease.

Research conducted by Dr. Joe Giles near Fargo, ND in 2003 also concluded that Aphanomyces susceptible and Aphanomyces tolerant varieties both had higher revenue per acre as lime rates increased. 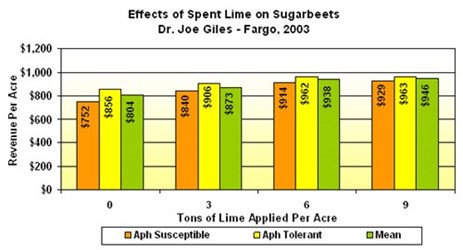 A field scale research project in a field infected with Aphanomyces continues to provide benefits from applications made prior to the 2004 crop.

Q. What is the nutrient content in the lime?

A. Lime from ACSC factories contains Phosphorus, Potassium and Sulfur. The amount contained per ton varies by factory location, so a follow up test of the lime should be obtained for verification of nutrients being applied.

Pounds of Nutrient Per Ton of Lime (DM Basis)

Averages from the 2009 campaign

Q. I have high pH soils, will adding lime raise this pH level?

A. Lime will seldom increase soil pH above 8.2, regardless of the application rate.

Q. How will an application of lime impact my other crops?

A. Researchers at NDSU and the University of Minnesota have evaluated the effect of liming on sugarbeets, wheat, soybeans and corn. No adverse effects were determined at any of the rates applied.

Q. When should I apply the lime?

A. Spreading factory spent lime anytime after you have harvested your 2009 crops will ensure you can thoroughly incorporate it yet this fall and before planting in 2010, earlier is better.

A. Yes, lime will reduce but not eliminate the sand syndrome effect.