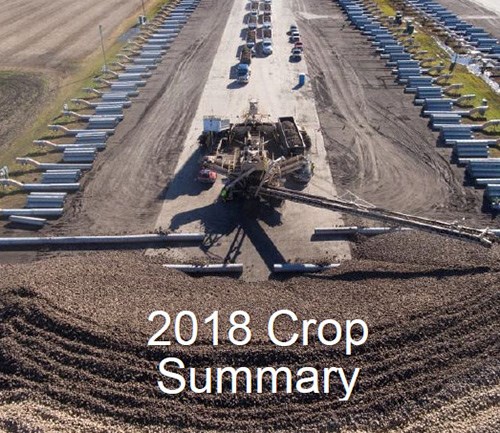 This year in the Red River Valley (RRV) of the North, we were subjected to a slightly different spring compared to recent years. Overall, the first half of April was the coldest on record, therefore delaying our planting start date. However, once the cold vacated the RRV, above average temperatures flourished. These warm temperatures combined with an impressive on-farm planting capacity aided in a crop planted in a short timeframe landing right at our 5 and 10 year average planting date of May 5th. Seedbed conditions were overall good with damp conditions in East Grand Forks and Hillsboro Districts with dry soil moisture conditions realized in southern Moorhead and northern Drayton Districts creating initial erratic crop emergence and varying plant populations in the drier soils. Throughout the growing season, soil conditions were overall drier in the RRV, resulting in low root disease presence. Sugarbeet root maggot pressure was accelerated from the spring heat in the north, expanding their presence further throughout our growing region. Weed control was overall good, however with increasingly new areas confirming glyphosate resistant weed presence primarily Waterhemp, and Common ragweed. We were subjected to a third high pressure Cercospora Leafspot growing season in a row, with continued fungicide resistance concerns again this coming year. Resistance management efforts in the field continue utilizing tank mixes, rotation of chemistries, and increased water volumes in an effort to stave off this damaging leaf disease. Overall, Cercospora Leafspot management was deemed good.

Pre-Harvest was initiated on August 14th with stockpile harvest commencing on October 1st. Stockpile harvest conditions exposed our region to the coldest first half of October dating back to the late 1800’s according to historic weather data, with lows recorded in the single digits combined with areas receiving over 12 inches of snow. Several harvest starts and stops were encountered throughout snow and frost events and harvest was called on November 9th due to freezing soil conditions.

September weather was not as conducive for anticipated yield accumulation and little if any growth was realized in October, so overall crop yield fell slightly short of yield estimates, however with better quality compared to last year’s crop. At the completion of harvest, the crop yielded 28.9 tons per acre (3rd highest in Company history) with 18.16% sugar and a 1.04 % SLM (Sugar Loss to Molasses), which equates to an RSA (Recoverable Sugar per Acre) of 9,884 lbs., second highest only to last year’s record RSA. Stand counts came in at 192 per 100 feet of row, short of last year’s record of 206. The 2018 crop in total came in at just over 11.1 million tons received with appreciated cold storage temperatures realized to date.

Challenges and Opportunities for 2019 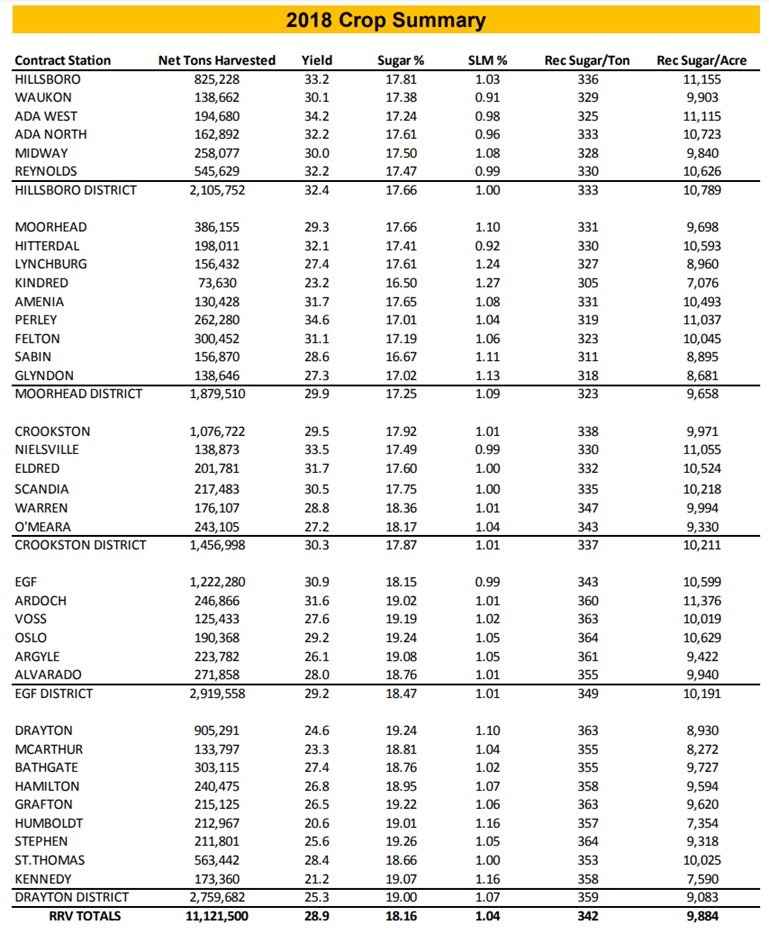 CONTACT YOUR AGRICULTURIST
Contact your American Crystal Agriculturist for the most up-to-date information on issues affecting sugarbeet crops in your area.