597 - Glyphosate Resistant Weeds Are on the Move

GLYPHOSATE RESISTANT WEEDS HAVE BEEN IN CONVERSATION AND A FOCAL POINT IN CROP PRODUCTION FOR GOOD REASON. Their ability to survive via selection has been most impressive and persistent along with their ability to reproduce and expand in population. The two primary weed species at this time finding weaknesses and overcoming susceptibility to Glyphosate at American Crystal Sugar Company have been Common ragweed and Waterhemp with future concern of Kochia and others.

Suspected resistant weeds have been identified as recently as this past fall in areas as far north as Grafton, ND and Euclid, MN, so this is not just a southern Red River Valley issue at all. Another level of a resistant weed surprise attack remains at the river system with reported Waterhemp identified along the banks of the Red River, posing a potential future threat especially considering any future flooding and the dispersal of resistant weed seed.

To slow the spread of resistant weed seed:

Crop rotation: The best crops to control glyphosate resistant weeds are rotational crops other than sugarbeets as nearly all have more herbicide options available with varying chemistries. Use a “systems approach” mentality for weed control considering that rotational crops play a vital role in the success of weed control prior to planting sugarbeets.

Equipment: Be cognitive of used equipment purchases and thoroughly clean before use. 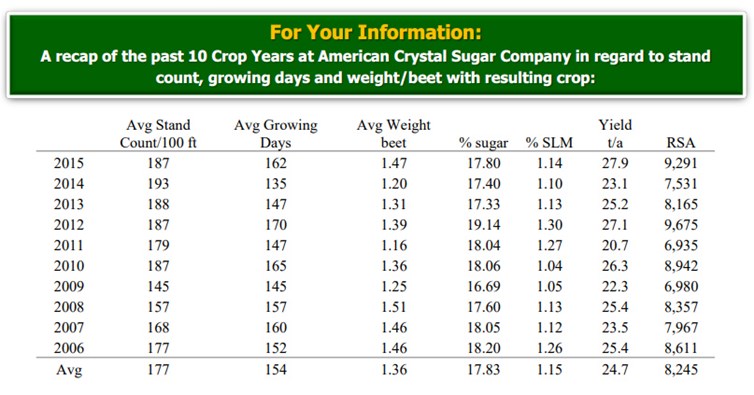 We’ve Got Agronomy Apps for That
The American Crystal Sugar Agronomy App is available for further Cercospora management and DIV (Daily Infection Values) readings for your nearest NDAWN station.