The 2010 crop is a record for tonnage, SLM, and recoverable sugar per acre. Numerous fields yielded more than 35 T/A and a few even topped 40 T/A. Yet final tons per acre were less than earlier predicted. April through August weather was favorable for high yields. September weather was 10 degrees cooler than 2009 and 5 degrees cooler than long term averages at the University of Minnesota - NWROC.

Q. What circumstances made the 2010 record crop possible?

A. Two primary factors were one of the earliest planting date completions ever and the highest average plant population ever achieved.

Q. What other factors contributed to this record crop?

Q. Why was the announcement of 15% of the crop at risk made August 13?

A. The announcement had to be made at that time before any growers began prepile harvest on August 17. This would enable all shareholders to make the best harvest plans possible given the information available at that time.

Q. What data was used to make the 15% at risk acres decision?

A. The main data factors were (a) very large sample weights in weeks 1 and 2 (b) very early planting (c) very high plant populations and (d) favorable weather in most of the RRV to that point in the growing season.

Q. Why were final yields lower than the 28 or 29 ton/acre projections?

A. Several factors contributed to lower than expected final yields. These include:

Q. Did the 2010 crop run out of nitrogen too soon, mature early and limit final yield potential?

A. SLM levels from agriculturist's samples were very low in early August. They remained at near record lows each week in August and September, Figure 2. Final crop yield was still more than 1 ton greater than ever before even with record low SLM values. Extensive research at NDSU and the UM will be required to more fully answer this question. 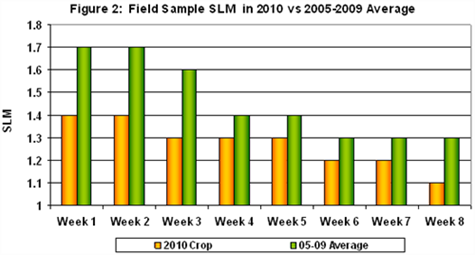